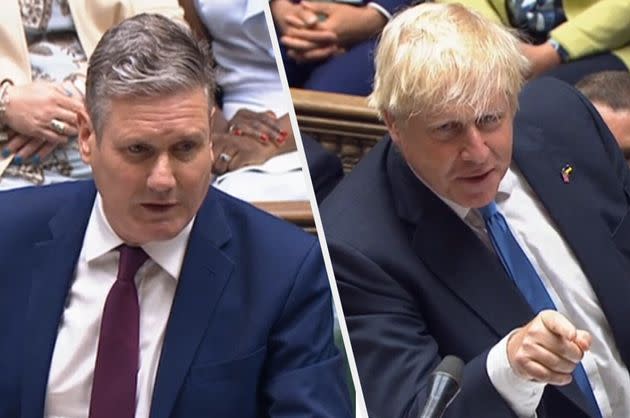 Keir Starmer said he was going to miss Boris Johnson’s “delusion” as the two men clashed for the final time at prime minister’s questions.

The Labour leader kicked off Wednesday’s exchange by sending Johnson and his family the best for the future.

He went on to read out comments made by Tory MPs vying to replace Johnson as prime minister.

During the rambunctious exchange, Johnson ignored pleas to keep the exchange civil by branding Starmer a “great pointless human bollard”.

Starmer said: “Inflation is up again this morning and millions are struggling with a cost of living crisis, and he’s decided to come down from his gold wallpapered bunker for one last time to tell us that everything’s fine, I am going to miss the delusion.”

He added: “She [Liz Truss] also said the former chancellor’s 15 tax rises are leading the country into recession and [Penny Mordaunt] was even more scathing.

“She said, again her words, ‘our public services are in a desperate state, we can’t continue with what we’ve been doing because it clearly isn’t working’.

“Has the prime minister told her who’s been running our public services for the last 12 years?”

Johnson said their government was investing £650 billion in infrastructure, in skills and technology and added: “What really matters to the people of this country right now is getting their appointments, get their operations, fixing the Covid backlogs, that’s what we’re doing.

“Fixing the ambulances, that is what he should be talking about, that’s why we voted through, that’s why we passed the £39 billion health and care levy which they opposed…

“Every time something needs to be done, they try to oppose it, he’s a great pointless human bollard, that’s what he is.”

Tory MPs will vote on the PM’s successor between 1pm and 3pm, with the result announced by Graham Brady, chairman of the 1922 committee of Tory backbenchers, at 4pm.

The final two candidates will then be put to party members to make the final decision, with the winner announced on September 5.

This article originally appeared on HuffPost UK and has been updated.